I can't believe you said that! 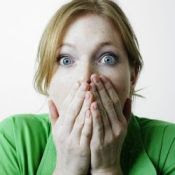 If there's one thing that drives me crazy more than anything else it's when someone says to me, "I can't believe you said that, you're a pastor's wife."
I get it a lot. I don't have a vulgar tongue. I don't have a potty mouth. I abhor swearing and don't even watch much television because I don't want to hear nasty stuff. I don't read smutty romance novels (A.K.A. porn for women) because I don't want that stuff in my head.
I do say what I'm thinking and believe it or not, I bite my tongue a lot of the time and refrain quite often from saying what I'm thinking.
Perhaps people think that since I'm a PW (that's Pastor's Wife in abbreviated form, it's what we call ourselves) I should act like the picture I saw once of a pastor and his wife in an old church directory. This must have been taken in the 60s. The pastor and "mrs pastor" (as I'm sometimes called) were standing next to each other with holy expressions on their faces. The both had their arms outstretched and were together holding an oversized Bible. They were looking at it with admiration and the picture was so odd that all I could do was laugh. Course, this was also the church where my children got yelled at for putting their Bible's on the floor or, if their Bible was on a table, for covering it with a piece of paper. Sad, but true. Funny thing, none of the children of the people who were scolding my kids are in the church today. Okay, not funny. Sad actually.
Anyway, back to the picture of the holy couple. Is that what people think their pastor and wife are like? We're real people. We don't sit around all day humming hymns and penning sermons.
True, there are times that I've been up all night because someone is on my heart so I'm praying for them.
True, there are things that we avoid because they aren't beneficial to us. Things like, TV shows, movies, books, and other media outlets.
True, there are places that we don't frequent. Like dance clubs with people dirty dancing.
True, there is clothing that we don't wear because we don't want anyone to stumble and we believe that parts of our bodies are only for each other to see.
BUT.
Yes, there's a but and it's a big one.
BUT.
Isn't that how all Christians should behave? Aren't we all called to the same standards?
Yes, I know that 1 Peter 5:3 says that the pastor is supposed to be an example to the flock.
So back to the "I can't believe you said that, you're a pastor's wife" thing. There's one person in my life who says this to me regularly. The last time it was because of something I did at a McDonald's drive-thru.
No, I did *not* go to McDonald's for myself. Ick. Ick. Ick.
Anyway, in the drive-thru, the voice over the intercom asked me, in the most over-the-top-cheerleader-voice, "Hi!! Welcome to McDonald's!! Would you like to try our new frozen strawberry lemonade?!?!!"
I couldn't help myself. I answered, just as perkily* "No I wouldn't!! I want an Egg McMuffin and a coffee!!"
She told me to go to the second window and pay for my order. Meaning I would bypass her. I paid and got the food. I handed it to the person who I ordered it for and was raked over the coals.
"You shouldn't talk to people like that."
"I can't believe you did that."
"You're a pastor's wife."
"What if she shows up in your church someday and recognizes you?"
I just said, "Then I'll make her laugh there too." I thought the situation was funny. Most of the people I know would have thought it was funny.
This person continually compares me to a pastor's wife that they once knew who was, "the perfect pastor's wife."
I'm sorry. No one is perfect. Just because you saw her one way doesn't mean that's how she always was.
We are all human.
I'd rather people really see me for who I am than as a facade that I create.
*turns out "perkily" is a real word!