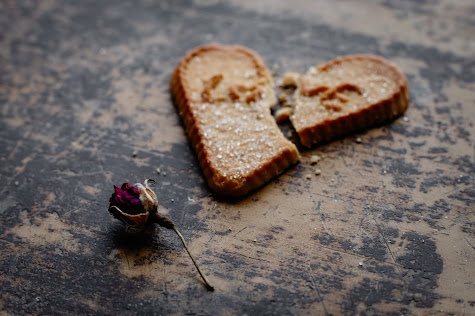 Years ago I spent some time disguised as the church secretary.

I know, you're trying to picture it. Trust me, it was rough. While my husband may be my dream man he was definitely not my dream boss. Nor was I a dream secretary. Being self-employed is what I was created for. Well, that and the ability to make really good apple cake.

On one of these days the church door was left unlocked and I was alone in the building (which takes on a creepy edge when you're alone there, just saying) and in wandered a sobbing woman. Being the one to see who entered (read: since I was alone) I met her in the entryway and she fell into my arms.

I sensed she needed to talk.

We sat in the sanctuary and she poured her heart out. She'd just found out her husband was cheating on her. She was devastated. She cried and talked for a long time and I encouraged her as best I could. I prayed with her and thought that was the end, but she started regularly attending the church and I got to know her. She was fun and bubbly and broken.

I found I really liked spending time with her (let's call her Jenn). Jenn kept me updated on what was happening at home and what evidence she had of her husband's cheating. Over time the ache became less but she was still bruised. One Sunday she came to church, excited to tell me that she met someone online and was going on a date with him.

I stopped her right there, "You're still married." Her questioned look assured me my words, hadn't registered. "Jenn, you're still married, you have no right to be going on dates. You're doing the same thing to your husband that he did to you."

She didn't see it that way. I don't remember much about her after that, she didn't confide in me anymore because she didn't like what I had to say. I've found that people generally don't want to be faced with the truth of their sin. It looks better on others than it does on ourselves. Painting ourselves as victims of sin results in a prettier image than seeing ourselves stained with it.

The Bible has plenty to say about adultery and other sexual sins (including fornication, but that's another topic for another day) but I think one of the main reasons it teaches so much about it is because the marriage covenant is held in such high regard.

Reasoning in ourselves will tell us that God wants us to be happy, yet nowhere in His word does He concern himself with our happiness. He wants us to be holy. Obedient. And filled with the fruit of the spirit. Following His word will result in deep joy, which is different than happiness. Happiness is fleeting, joy is steadfast. We get too caught up in emotions and in our present that we overlook or negate His desire for our lives.

If Jenn was more eager to chase the Lord than she was to chase a relationship with a man she would have been fulfilled. That man she met on the dating website, if he was who God intended for her, would still be there after her divorce was final. This little compromise, while acceptable to the world, breaks God's heart. We cannot be held responsible for the actions -sins- of others, but we are responsible for how we respond to them.

If you're in this situation I urge you to be steadfast and true. Cling to the word of God and who He is. If you're broken, allow Him to mend you. Be still. He isn't through with you yet. Don't allow yourself to fall victim to the lies of the world. Her ways are different than His.

I haven't heard from Jenn in years. Rumor has it she met a man on a dating site and is living the dream on his farm. I'm currently living the dream in my home office where the only person I have to answer to regarding my job is myself. ;)

June 05, 2013
I eat the same thing for breakfast every single day. Most p eople think it's weird, I just think of it as fuel to get my day sta rted . I was never big on cereal, mostly because I don't like milk. Other than a little splash of it in my tea I don't drink it . I start my day with an organic brown rice cake with peanut butter and jelly on it. It works for me. The peanut butter provides prot ein and the jelly provides the yum. I prefer the Lundberg Farms brown rice cakes. Brow n rice is a good carb, white rice is a bad carb. White rice has no nutritional value and turns to sug ar in your system. Brown rice is a whole grain and is a mu ch better choice.  I get the ligh tly salted ones. I find these in the organic food section of my favorite grocery store. Now, let's look at some peanut butter and jelly. For the peanut butter I just chose Skippy because it's a brand that everyone is familiar with. I prefer the natu ral peanut butters, but if you don't like
1 comment
Read more

December 26, 2020
Over the course of my nearly twenty-nine year marriage I've moved to different houses fourteen times. At the onset of nearly all of those moves I thought about how the new home would make everything better. That being in different walls would solve all of my angst. It wasn't until the past couple moves (the last one being nine years ago) that I realized the only thing that was going to change was my address because I'm a human with issues and I take those issues with me everywhere I go. Life is a little like that though. We observe others and compare our lives to theirs.  "If my house was bigger I could _____ just like they do."  "If we had more room we would get along better."      "If our house was newer it would look better." The truth is that rarely does changing our surrounding change anything else. We are still the same messy person we were before. We still have the same marriage issues we had before. We still struggle with our diets. W
Post a Comment
Read more

Suzanne
I enjoy simple things: the sound of the rain, the laughter of a child, a cup of tea, a good book. I believe in Jesus and I want to shine for Him. I love to cook. Chocolate is a life essential. Fresh cut fries are my weakness. I'm an introvert, a pastor's wife, and I love to write.